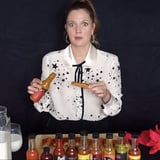 There are many reasons to love Drew Barrymore, and the newest is how much of a champion she is. The Golden Globe Award-winning actress made an appearance on First We Feast’s Hot Ones on Thursday, and although the vegan wings nearly rendered her incoherent, she made it all the way to the final sauce! She admitted that her daughter Olive gave her tips on how to handle the challenge, but they didn’t quite prepare her for the reality of the heat. “Scarlett [Johansson] said it’s like giving birth, but I had C-sections so I couldn’t relate,” Drew noted. Welp, she can relate now!

The ever-unflappable Sean Evans managed to get Barrymore talking about some of her classic film roles like The Wedding Singer, Charlie’s Angels, and Scream, as well as her cameo in SZA’s music video for “Drew Barrymore.” She also shared some background on her 20-plus years of friendship with frequent costar Adam Sandler, saying that she loved his brand of “good guy” humor that everyone could appreciate and had to work with him. We’re crossing our fingers that the two will have a mini reunion on Barrymore’s upcoming talk show, The Drew Barrymore Show, which is slated to premiere on CBS on Sept. 14. Until then, we’ll watch the actress burp her way through her Hot Ones challenge.

END_OF_DOCUMENT_TOKEN_TO_BE_REPLACED The Organization Gay Pride VI is hosting a Pride Walk this Saturday June 25th at 9am, starting at Emancipation Garden! USVI News Alli Bourne-Vanneck gets the details, and hears of different ways to support the LGBTQIA community in the territory. END_OF_DOCUMENT_TOKEN_TO_BE_REPLACED