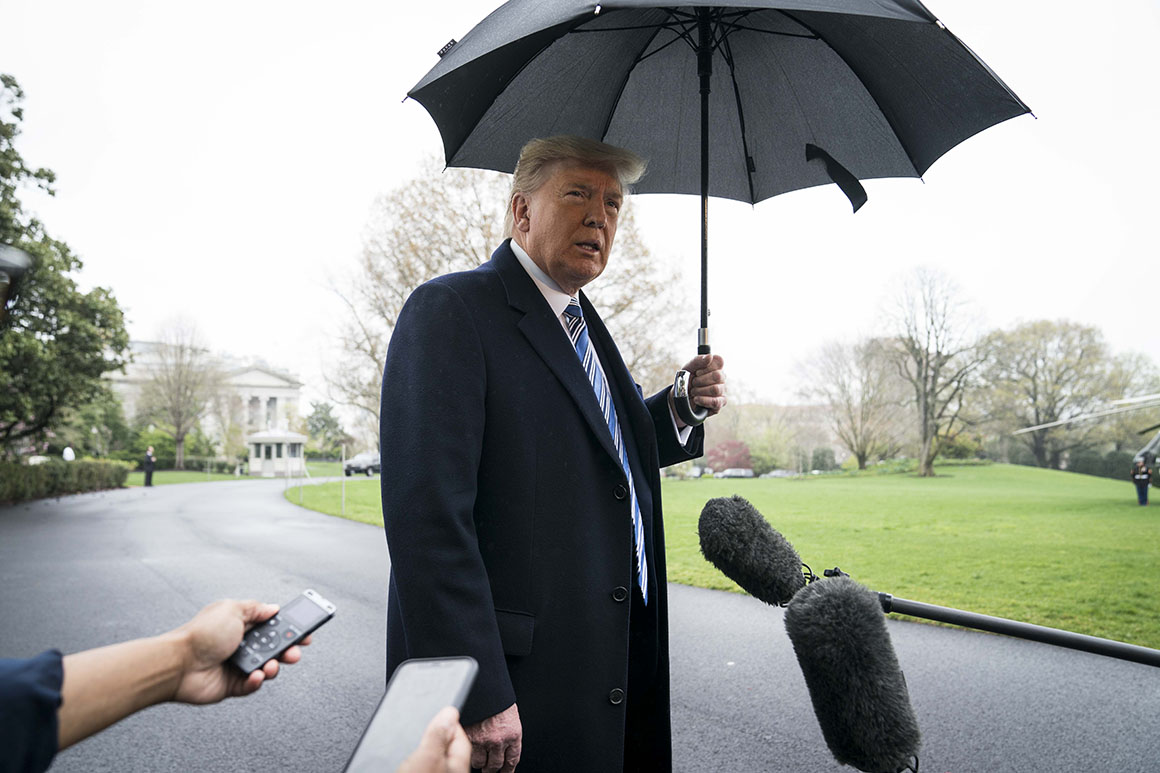 “We might not have to do it but there’s a possibility that sometime today we’ll do a quarantine — short-term, two weeks for New York, probably New Jersey, certain parts of Connecticut,” Trump told reporters outside the White House Saturday afternoon.

The measure would be “an enforceable quarantine,” Trump said, adding that he’d “rather not do it, but we may need it” to restrict people traveling from New York to other states.

“They’re having problems down in Florida. A lot of New Yorkers are going down — we don’t want that,” Trump said, adding that he had just spoken with Florida Gov. Ron DeSantis.

Trump said he plans to speak with New York Gov. Andrew Cuomo later Saturday. The White House is not currently considering shutting down the New York City subway, he said.

Cuomo seemed surprised when asked about the statement during his daily coronavirus briefing in New York, telling reporters he had not discussed a potential quarantine with the White House.

“I don’t even know what that means,” Cuomo said, adding that he doesn’t “like the sound of it.”

A senior administration official said Trump spoke with Cuomo on Air Force One. The official said the White House coronavirus task force has been telling the president that stricter guidelines may be necessary in New York, where federal officials have already called for people leaving the city and going elsewhere to self-quarantine for two weeks.

Federal law gives the president vast emergency powers in a pandemic, including the ability to quarantine people to slow the spread of disease between states.

Trump spoke with reporters as he left the White House for Norfolk, Va., where he delivered remarks at the Naval Station Norfolk send-off for the USNS Comfort, a naval hospital ship setting out for New York City.

Standing in front of the ship later Saturday, Trump reiterated that he was considering ordering a quarantine. “I am now considering — and will make a decision very quickly, very shortly — a quarantine, because it’s such a hot area, of New York, New Jersey and Connecticut," he said.

Trump also said that the Comfort “will provide a critical surge capacity” for the New York metropolitan area. The ship — outfitted with 12 fully equipped operating rooms and 1,000 hospital beds — will serve as medical backup for people uninfected with the virus who need critical care while hospitals are overrun with Covid-19 cases.

The Comfort “will open capacity all over New York City,” Trump said. It is expected to arrive in New York on Monday.

The ship’s engines began stirring shortly before Trump concluded his remarks, and about a dozen sailors on the upper deck saluted the president as the ship pulled away toward the Chesapeake Bay as the speech concluded.

END_OF_DOCUMENT_TOKEN_TO_BE_REPLACED

The Nintendo GameCube has a memorable design. The cube-shaped form factor coupled with a carrying handle made it surprisingly portable and pretty darn cute. It was also Nintendo's first console with an optical drive, but Nintendo being Nintendo, it bucked the ... END_OF_DOCUMENT_TOKEN_TO_BE_REPLACED

Is there anything that Target doesn’t sell? From fan-favorite sexual wellness products to innovative collaborations, Target is ALWAYS up to something. You can now add an expanded selection of Levi’s Red Tab jeansto the list of never-ending brands sold at Targe... END_OF_DOCUMENT_TOKEN_TO_BE_REPLACED