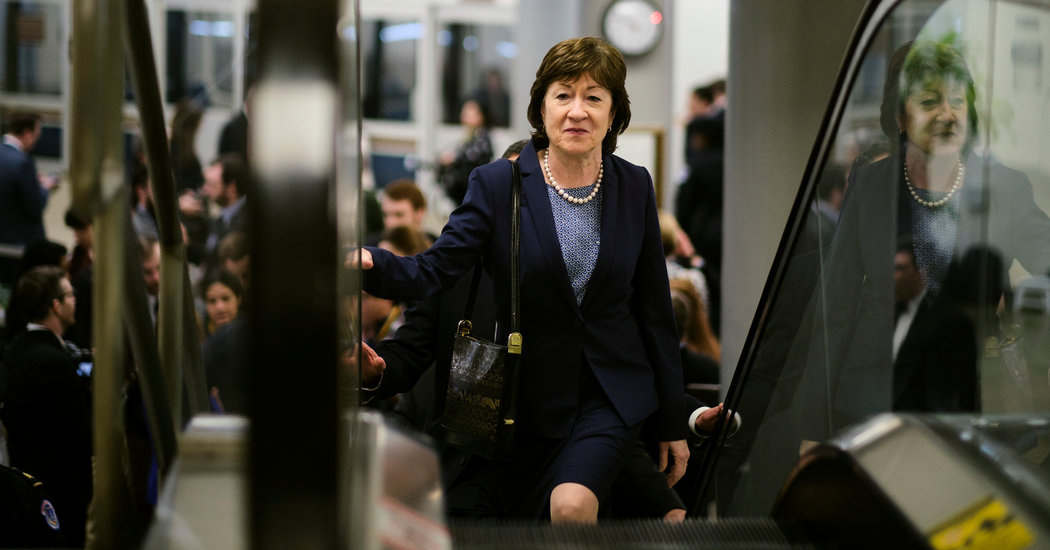 Pick the worst moment of the Senate impeachment hearings:

A) Susan Collins saying it’s O.K. to keep Donald Trump in office because he’s “learned from this case.”

B) A spokeswoman for Jim Risch claiming the senator was not sleeping but just “listening with his eyes closed.”

Well, the McConnell speech during Wednesday’s finale was pretty stunning. “Our adversaries seek to divide us against each other,” the majority leader told his colleagues, warning them not to become “consumed with partisan rancor.”

Nothing Mitch hates more than failure to be politically evenhanded. It’s probably one of the things he mulled frequently while sitting like a nesting hen on piles of Barack Obama’s judicial nominations.

Still, for the worst impeachment moment, I’m going with Susan Collins. The idea that Donald Trump had learned any lesson is ridiculous. Collins knows — the whole world knows — that Trump is a man with a learning curve that resembles a garter snake.

On the same day she delivered her theory as an excuse for voting for acquittal, the president discussed his Ukraine-related behavior at a lunch with television anchors. What do you think he said?

A) “All of life is a learning process.”

B) “Maybe I might concede I could possibly have done a little better.”

Yeah, it’s C. You do know your president, don’t you?

Collins had made a splash by voting in favor of calling witnesses during the Senate’s impeachment trial. We live in times when agreeing to listen to people who know a lot about the matter you’re debating is an act of extreme daring.

Of course, the witness thing failed. Some dark minds believe that Collins’s moment of independence came only because McConnell knew he had enough votes to kill the proposal without her. Collins is heading toward a tough re-election in Maine this fall, and she needs bipartisan support. Perhaps, people of Maine, you haven’t noticed that your senator’s political independence tends to work best when the matter at hand is meaningless. Could be worse. At least she respects you enough to pander.

Many Senate Republicans settled on taking Trump’s side with a teeny tiny nod toward objectivity. (Lisa Murkowski went all the way for “shameful.”)

A few red state Democrats had a tough time, too. Doug Jones, who won that dramatic special election in Alabama and is generally regarded as the most endangered Democratic senator this fall, said deciding to support conviction cost him a lot of sleep.

“There will be so many who will simply look at what I am doing today and say it is a profile in courage,” he told the Senate. “It is not. It is simply a matter of right and wrong.”

Well, also an understanding that Jones’s surprise victory last time around was powered by a stupendous turnout by black women voters. Still, the Cook Political Report instantly downgraded his chances for re-election.

When the Senate voted to let Trump off the hook, the suspense had fizzled down to whether Democrat Joe Manchin would take a dive and whether Republican Mitt Romney would take a principled stand.

Manchin had tried desperately to find a way out by proposing the Senate merely censure the president for … trying to force an ally to find dirt on Joe Biden by withholding congressionally approved military aid. Nobody seemed to regard censure as a good plan, and Manchin voted to convict, depriving Trump of the chance to say he had bipartisan support.

Democrats of West Virginia, perhaps you find your senator a little slippery at times. But when you go to the polls, remember that one big day, he single-handedly made Donald Trump a little sad.

Romney, on the other hand, was an actual profile in courage. Mitt Romney! “I knew from the outset that being tasked with judging the president, the leader of my own party, would be the most difficult decision I have ever faced. I was not wrong,” he said emotionally.

He’s going to get a lot of grief from his Republican supporters. Still, remember that this is a wealthy 72-year-old with five years to go on his current Senate term.

Over his career, Romney’s had a history of taking principled stands and then backing off when things get tough. The Mitt who ran for governor of Massachusetts was an entirely different entity than the one who ran for the Republican presidential nomination. He was horrified by Donald Trump’s candidacy — vowed never to vote for him. Then there he was dining with the president-elect, lusting after a cabinet post Trump had no intention of giving him.

Now, he’s erased a lot of bad memories. “Corrupting an election to keep oneself in office is perhaps the most abusive and destructive violation of one’s oath of office that I can imagine,” Romney said, voting to convict on abuse of power.

When history looks back on Mitt Romney, this should be the moment that gets remembered. Not the uninspiring presidential race or political flip-flops. Not even the time he drove to Canada with a dog on the roof of the car.

END_OF_DOCUMENT_TOKEN_TO_BE_REPLACED

The Nintendo GameCube has a memorable design. The cube-shaped form factor coupled with a carrying handle made it surprisingly portable and pretty darn cute. It was also Nintendo's first console with an optical drive, but Nintendo being Nintendo, it bucked the ... END_OF_DOCUMENT_TOKEN_TO_BE_REPLACED