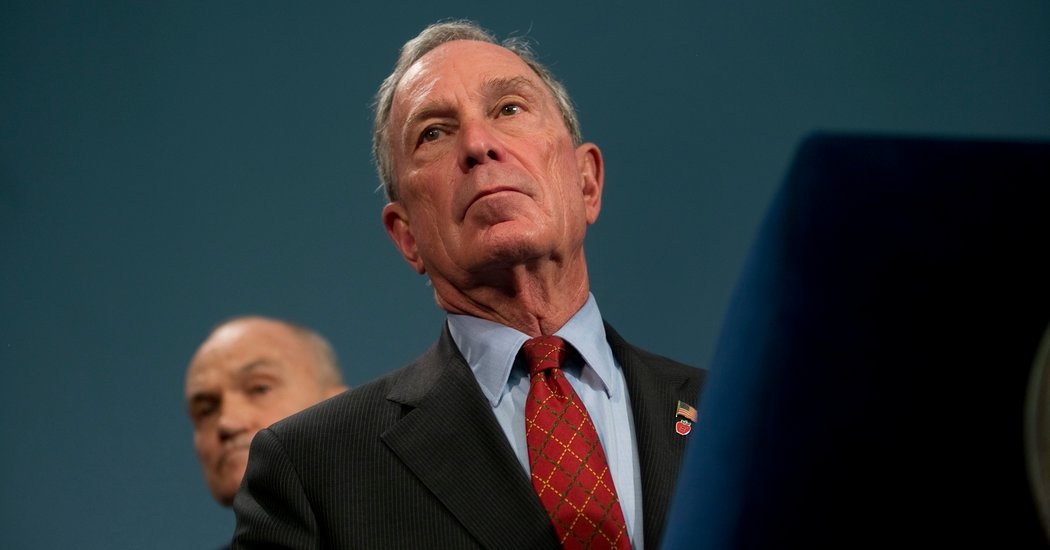 Let’s state some facts: Michael Rubens Bloomberg notoriously expanded stop-and-frisk in New York City to obscene proportions, violating the bodies and constitutional rights of mostly minority men and boys, and not only defended the policy, but mocked his detractors and bragged about it.

What Bloomberg did as mayor amounted to a police occupation of minority neighborhoods, a terroristic pressure campaign, with little evidence that it was accomplishing the goal of sustained, long-term crime reduction.

Nearly 90 percent of the people stopped were completely innocent. He knew that. They were the collateral damage in his crusade, black and brown bodies up against walls and down on the ground, groped in the middle of the city by strange men with guns, a vast expanse of human psychological wreckage about which he couldn’t care less.

A recording from a speech Bloomberg delivered at the Aspen Institute in 2015 underscores just how callous and cavalier he was in his thinking about this racist policy.

“Ninety-five percent of your murders — murderers and murder victims — fit one M.O.,” Bloomberg said. “You can just take the description, Xerox it and pass it out to all the cops. They are male, minorities, 16 to 25. That’s true in New York. That’s true in virtually every city.”

Later he says, “The way you get the guns out of the kids’ hands is to throw them against the wall and frisk them.”

So many things to dissect here.

First, Bloomberg didn’t see individual criminals, many of whom happened to be minorities; he saw a class of criminals who were minorities. “They are male, minorities, 16 to 25.” Many of these were children.

As Daniel Nichanian, editor of The Appeal, wrote this week on Twitter: “Each year of Bloomberg’s 12-year mayorship, at least 50 percent of the people arrested for marijuana were black. And at least 85 percent were nonwhite each year, usually much higher. That’s tens of thousands of people each year.”

And Bloomberg defended the practice by saying that the only way to get the guns out of the kids’ hands was to throw the kids against a wall. But nearly 90 percent of these young people were completely innocent. They had done absolutely nothing wrong, let alone possess a gun.

The Columbia Law School professor Jeffrey Fagan produced a report that became part of a class-action lawsuit against the city in 2010. It found that “[s]eizures of weapons or contraband are extremely rare. Overall, guns are seized in less than 1 percent of all stops: 0.15 percent. … Contraband, which may include weapons but also includes drugs or stolen property, is seized in 1.75 percent of all stops.”

As Fagan wrote, “The N.Y.P.D. stop-and-frisk tactics produce rates of seizures of guns or other contraband that are no greater than would be produced simply by chance.”

Bloomberg didn’t care about any of this. He didn’t care about these innocent black and brown bodies. Somewhere in each barrel of good apples there was a bad one, and he was willing to spoil the whole batch to purge that rare bad one.

These minority boys were being hunted. Their neighborhoods were experiencing an occupation. Citizens wanted crime abatement, but they didn’t expect apartheid.

And yet in the same way that white people in New York City had turned away when Bloomberg was executing his racist policy, many Democrats — including some black ones — appear willing now to turn a blind eye to his past.

Bloomberg is blanketing the airwaves with slick ads and glamouring liberals into amnesia and acquiescence. These liberals are then openly gaming out scenarios in which Bloomberg is the last, best option.

They don’t recognize that Bloomberg is the master of this sort of emotional manipulation. During his 2001 campaign for mayor, he ran ads that The New York Times noted focused on old crime fears.

“The scenes, set to dramatic synthesizer music punctuated by sharp blasts of percussion, come from what could well be called ‘N.Y.P.D. Bloomberg,’” The Times reported. “They seem calibrated to throw fear into the hearts of the citizenry at the thought of crime mushrooming again in a post-Giuliani New York City.”

During a campaign debate that year, Bloomberg, a Republican at the time, was asked how prevalent he believed racial profiling was in the New York Police Department. His answer is fascinating to examine in retrospect. He said: “In terms of the actuality, it is probably a very small number of police officers. Most police officers in this city work very hard. They are not racist thugs.”

But then he turned them into just that, making them part of a citywide system of racial profiling. Even the police objected. When Bloomberg was finally forced last fall to apologize for stop-and-frisk so he could run for president, Patrick Lynch, president of the city’s Police Benevolent Association, issued a blistering statement:

“Mayor Bloomberg could have saved himself this apology if he had just listened to the police officers on the street. We said in the early 2000s that the quota-driven emphasis on street stops was polluting the relationship between cops and our communities. His administration’s misguided policy inspired an anti-police movement that has made cops the target of hatred and violence, and stripped away many of the tools we had used to keep New Yorkers safe.”

In 2012, after million of stops, Bloomberg stood up in a church in Brownsville, Brooklyn, among the neighborhoods hardest hit by the policy, and declared that racial profiling was banned in the Police Department. “We will not tolerate it,” he said.

That was a Donald Trump-level lie.

The next year a federal judge ruled that the way the city used stop-and-frisk was unconstitutional because it amounted to a “policy of indirect racial profiling.”

No amount of Democrats’ anti-Trump fear and panic will ever erase what Bloomberg did. Democrats have a field of fascinating candidates. Many have some crime and justice issues of their own, but nothing approaching the scale of Bloomberg’s racist policy.

If Democrats cast aside all of these candidates in favor of Bloomberg and his wealth, I fear they will be making it harder to defeat Trump in November.

END_OF_DOCUMENT_TOKEN_TO_BE_REPLACED

Over the course of last year I interviewed over 50 women in film, from cinematographers to producers to writer/directors for my column Female Filmmakers in Focus. I’m so happy to continue this work at RogerEbert.com. I could not have asked for a better first g... END_OF_DOCUMENT_TOKEN_TO_BE_REPLACED

In the past two weeks, you’ve probably shared at least one embarrassing photo with family or friends. The process, from taking the photo to sharing it, was practically instantaneous. Yet only 20 years ago, you would have had to load and unload film in your cam... END_OF_DOCUMENT_TOKEN_TO_BE_REPLACED