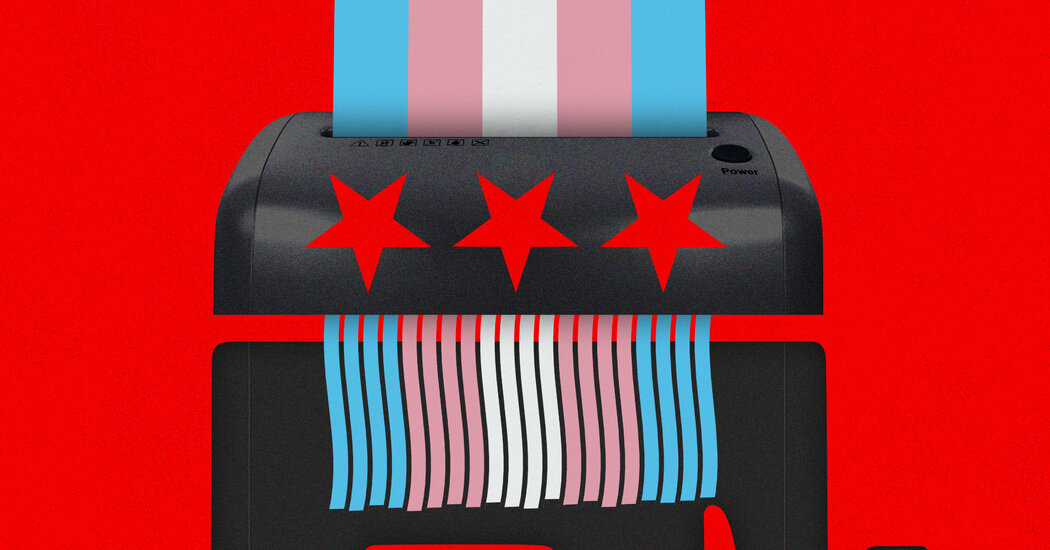 Straight people have often asked me what I, a gay man, have in common with someone who’s trans. Gay people have often put that question to themselves. There are many answers. Here’s one: I know what it’s like to have my identity, my dignity — my very hold on happiness — pressed into partisan battle and fashioned into a political weapon.

And right now, trans people are being used, cruelly.

You probably heard about what happened in Arkansas. On Tuesday, state lawmakers there voted overwhelmingly, by a three-to-one ratio, to override a veto from the Republican governor, Asa Hutchinson, and effectively ban gender-affirming medical treatments, such as puberty blockers and hormone therapy, for trans youth under the age of 18.

And they’re expert at identifying vulnerable, marginalized populations and demonizing them in the interest of political gain. That’s what Republicans in Arkansas, in Alabama and in dozens of other states are doing with scores of active bills, many of which focus on denying trans youth gender-affirming treatments and dictating how they may or may not participate in sports.

They’re inventing a problem to whip up a culture war that they’re convinced will redound to their benefit. Worried that their party can’t retain or wrest power with its positions on the economy and prescriptions (or lack thereof) for health care, they’re fighting on other turf, with no pause to contemplate the need for their offensives and no thought for the casualties.

Back in the early aughts, they put gays and lesbians in their sights, railing against nascent progress toward marriage equality and deciding that for the good of the republic — for its very survival! — it was necessary to outright outlaw same-sex marriage via ballot referendums and amendments to state constitutions. This was all the Republican rage in 2004, which just happened to coincide with President George W. Bush’s re-election effort.

The legally recognized weddings of two men or two women had no negative practical effect on the straight people around them, who might be offended by the idea but were hardly so much as inconvenienced by the reality. It wasn’t as if the gay or lesbian couples were going to stop being gay and lesbian couples if they couldn’t put their names on marriage licenses. And their vows were as much an affirmation of traditional values, such as commitment and monogamy, as they were a repudiation of them.

But many Republicans — aided, to be fair, by many Democrats’ support in 1996 for the federal Defense of Marriage Act, which President Bill Clinton signed — cast those vows as cultural death knells. Many Republicans portrayed me and my kind as leches, even child molesters, laundering perversion into propriety. It’s a hell of a thing: to hear words from civic “leaders” that openly or tacitly encourage people to hate you, maybe even to strike out at you. It puts fear in your heart and rage in your brain.

And it’s happening to trans people. Republicans’ response to their party’s political failures at the ballot box in 2018 and 2020 is to find an issue that they believe paints Democrats as convention-smashing libertines and themselves as the defenders of innocent children and a moral order. It’s to name monsters out there and take up torches against them. The issue is trans equality. The monsters are trans people.

Not by accident, they made an uncharacteristically prominent appearance in Donald Trump’s first big speech after his exile from the White House, when he and other disappointed Republicans were regrouping and trying to figure out the path forward.

“Joe Biden and the Democrats are even pushing policies that would destroy women’s sports,” he told an audience at the Conservative Political Action Conference in Florida in late February. An overnight feminist, he added that young girls and women “are now being forced to compete against those who are biological males.”

Leaving aside his loaded language and reductive description, he was suggesting that a relatively rare scenario was pervasive. That’s a classic wedge-issue strategy. Similarly, Republican lawmakers in the many red states pushing measures like Arkansas’ raise the specter of irreparably damaged, even abused children — the Arkansas law is the Save Adolescents From Experimentation Act — without much if any proof of that.

Other clues: The rapid metastasizing of often like-worded laws around the country and the sudden urgency of lawmakers intoning the same dark warnings. That smacks of coordination from some misanthropic mother ship.

When Senator Rand Paul, a Kentucky Republican, grandstands in a Senate hearing by comparing surgery elected by trans people to the “genital mutilation” — a phrase he used repeatedly — of girls in cultures that seek to subjugate women by stamping out their sexual pleasure, that’s not an honest policy debate. That’s just a storm of nasty words distracting voters from the governmental and societal failures really standing between them and the American dream. Trans people aren’t the impediment.

The arrogance of Republican lawmakers at the state level is stunning. They’re overriding parents’ considered decisions regarding their own children, whom they surely care and fret about more than any stranger does. If you read or listen to interviews with them, what’s most striking is how much research and reflection they’ve done, how thoroughly they’ve considered what their children confront and what their children need.

Lawmakers are getting between physicians and patients. They’re staging a medical intervention, on the grounds that one group of people (doctors, parents) must be controlled for the protection of another (children). If that’s OK in this case, why not when Covid-blasé Americans reject masks or refuse vaccines, putting other Americans at risk? Some of the same Republicans who claim that they’re coming to the rescue of children receiving testosterone are just fine letting the rest of us marinate in the coronavirus.

They’re opportunists. They’re extremists. Don’t take my word for it. Take Hutchinson’s. The governor of Arkansas is hardly anyone’s idea of a moderate Republican. He recently signed legislation allowing Arkansas physicians to cite religious objections in refusing to provide treatment. He also signed into law a bill barring trans women and girls from competing against other women and girls in sports.

But he has said repeatedly over the past week that the bill regarding medical care for trans youth was reckless and uncompassionate. In an interview with The Times’s Lisa Lerer, he conceded that as part of “the cultural wars that we’re engaged in,” Republicans were often “acting out of fear of what could happen, or what our imagination says might happen, versus something that’s real and tangible.”

He finally, in this instance, drew a line and took a stand. My own fear is that it will be a lonely one, and that a great many people will suffer because of that.