Number of coronavirus cases in US overtakes Italy and China

The US now leads the world in the number of confirmed coronavirus cases.

This puts it ahead of China, where the virus originated, and also ahead of Italy, Europe’s epicentre which has been overwhelmed by the virus in recent weeks. 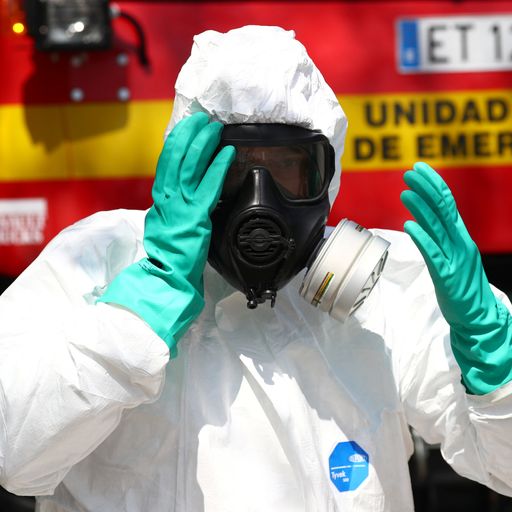 The country has seen a sharp decrease in new cases in recent weeks and has moved to suspend visits from almost all foreign nationals – a turnaround from the situation in January, when the US and Europe were limiting travel from China.

US President Donald Trump dismissed his country’s high number of cases as being a “tribute to our testing”, adding that health officials were “testing tremendous numbers of people”.

Mr Trump also cast doubt on China’s numbers, saying: “You don’t know what the numbers are in China.”

President Xi Jinping took issue with this statement in a call with Mr Trump – reportedly telling him that Beijing had been open and transparent since the epidemic began.

Despite the continuing spread of the pandemic in the US, Mr Trump said the country “needed to get back to work”, adding that “I think it’s going to happen pretty quickly”.

Mr Trump has also dismissed pleas from some state governors for more ventilators to treat the worst-affected patients.

New York has seen around 30,000 cases, most of them in New York City. Almost 400 people have died, with the peak expected to come weeks from now.

Image: In New York the coronavirus outbreak is getting worse

New York governor Andrew Cuomo has warned that the shortage of ventilators is “astronomical” and is expected to worsen.

Many coronavirus victims need ventilators to help them breathe – often for many weeks – and Mr Cuomo warned: “Any scenario (in terms of patient numbers) that is realistic will overwhelm the capacity of the healthcare system.”

A February estimate by infectious disease specialist Dr James Lawler found the US would need 960,000 ventilators for victims of the virus, although not all of these would be required at the same time. Another study has estimated some 300,000 would be needed very soon – still far more than are readily available.

Image: New Orleans, Louisiana, is badly-affected by the coronavirus

Demand for ventilators in the state has already doubled and governor John Bel Edwards said there could be none available by 2 April and beds could be full as early as five days later “if we don’t flatten the infection curve soon”.

Warner Thomas, chief executive of the state’s hospital group Ochsner Health System, said 80% of the state’s intensive care patients are on ventilators. The normal rate is 30% to 40%, he said.

As well as a ventilator shortage, there have been reports of doctors and nurses having to recycle face masks or even make their own.

Coronavirus UK tracker: How many cases in your area?

Also, US Attorney General William Barr said he has told the Bureau of Prisons to expand its use of home confinement for some inmates as the virus spreads through the prison system.

Six inmates and four prison workers have tested positive for COVID-19. Several prisons are on lockdown.

Mr Barr said: “One of the things we have to assess is whether that individual… will be more safe in the particular circumstance in which they are going to find themselves. And in many cases, that may not be the case.”