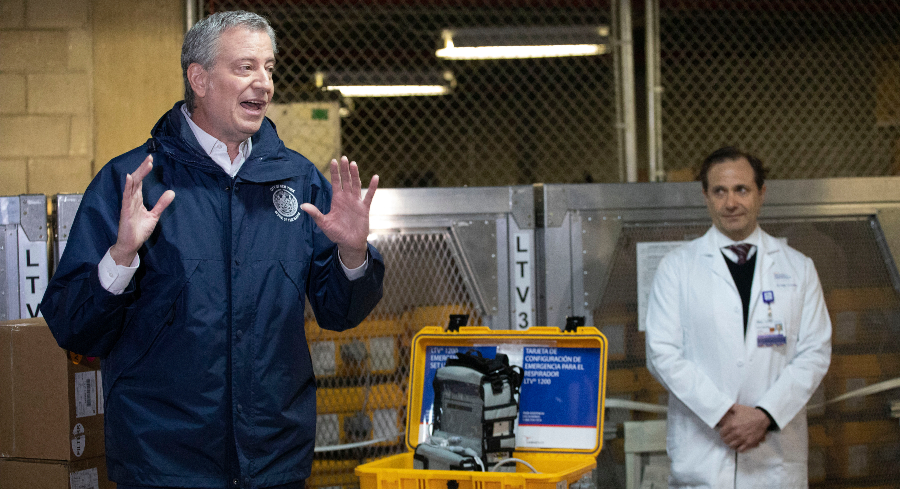 As New York battles the spread of coronavirus, the state has ordered nonessential businesses to shut down, banned gatherings of any size and mandated that people stay six feet away from each other. Not everyone has listened.

Fines will be a last resort, but de Blasio has authorized police officers to give them out to people who are ordered to disperse but fail to do so.

There were 32,308 confirmed cases of coronavirus in the city on Sunday, and the death toll climbed to 678.

De Blasio said fines of $250 to $500 would begin for people found congregating in public spaces who fail to disperse when ordered, or return after officers have told them to move along.

“They’re going to give people every chance to listen, and if anyone doesn’t listen, then they deserve a fine at this point,” de Blasio said. “I don’t want to fine people when so many folks are going through economic distress, but if they haven’t gotten the message by now, and they don’t get the message when an enforcement officer’s staring them in the face … that person then deserves the fine, so we’re going to proceed with that.”

In another sign of how hard the city has been hit by the pandemic, a field hospital is being erected in the heart of Central Park to help cope with the influx of patients

Mount Sinai Hospital and the relief organization Samaritan’s Purse are erecting the hospital in tents in the famed park’s East Meadow, de Blasio said Sunday. It will hold 68 beds, and is expected to be up and running by Tuesday.

“We’re going to be using every place we need to use,” de Blasio said. “This is the kind of thing you will see now as this crisis develops and deepens.”

As subway service cuts have led to crowded cars on some trains despite a massive drop in ridership, de Blasio also announced that NYPD and MTA workers would do checks of subway cars and force riders off cars that are too crowded.

It was not clear where they would send riders removed from a crowded train car to keep them at a safe distance.

The Staten Island ferry will cut service to one boat an hour, beginning at midnight. The ferry’s ridership has dropped 86 percent.

The city is adding additional ambulances, tours and EMS crews as the number of 911 calls has swamped the emergency line. Late last week, the number of medical calls hit a level never before seen in history.

“The number of 911 calls have been skyrocketing and it’s putting a huge, huge demand on EMS,” de Blasio said. “We’ve never seen our EMS system get this many calls, ever.”

On Saturday, the city sent out 1,400 more ventilators to hospitals across the five boroughs. New York still expects to need 15,000 of the life-saving devices by the time the crisis peaks, and is asking the federal government to send at least 400 more by Wednesday.

END_OF_DOCUMENT_TOKEN_TO_BE_REPLACED

In the four years since their daughter killed herself at university, Robert and Margaret Abrahart have been trying to understand why she was left to cope with her problems alone – and to help other vulnerable young peopleDays after their daughter died in April... END_OF_DOCUMENT_TOKEN_TO_BE_REPLACED