Everything We Know About the Scarab in “Moon Knight” So Far 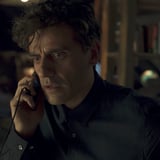 The first episode of “Moon Knight,” which arrived on Disney+ on Wednesday, March 30, had a wild season premiere. Egyptian mythology is weaved into the show’s plot, so it’s understandable if you were left with some questions at the end of the episode, especially what exactly the scarab everyone’s after is and why. Here’s a breakdown of what you need to know about the scarab in “Moon Knight.”

How Is the Scarab Introduced in “Moon Knight”?

In “Moon Knight”‘s premiere, we meet a soft-spoken man named Steven Grant (Oscar Isaac) who’s been living a double life as a mercenary named Marc Spector/Moon Knight. He experiences frequent blackouts that are caused by his dissociative identity disorder. One day, after experiencing one of these blackouts, Steven wakes up in the middle of a field somewhere in the Alps and finds a scarab, which is an amulet from ancient Egypt shaped like a dung beetle, in his pocket. Two men begin shooting at him and chase him to a nearby village, where he encounters a cult leader named Arthur Harrow (Ethan Hawke), who demands Steven give the scarab to him. Steven tries to hand it over, but is physically unable to no matter how hard he tries. Steven then hears a mysterious voice in his head telling him to protect the scarab. After he makes a run for it, Arthur orders his followers to chase after Steven. Thanks to his other identity as Marc, however, Steven is able to fight his way free and make it home to London.

Arthur and his followers eventually track Steven down at the museum he works at. Although they’re unable to get their hands on the scarab by the end of the episode, it becomes clear the series will revolve, at least in part, around Steven/Marc trying to protect this amulet from Arthur.

What Does the Scarab Do in “Moon Knight”?

Scarabs were a form of Egyptian amulet molded in the shape of the scarab beetle of the eastern Mediterranean area considered sacred in ancient Egypt. In Egyptian religion, the amulets symbolized rebirth or regeneration. In “Moon Knight,” the scarab Arthur is after is gold and belongs to the Egyptian Goddess named Ammit. In episode two, Steven discovers that the scarab, when activated, is a compass that points to the north.

Why Does Arthur Want the Scarab in “Moon Knight”?

Arthur is a devoted follower of Ammit, so because the scarab belongs to her, he’s determined to get it back from Marc. In episode two, it’s revealed Arthur wants to resurrect Ammit because he believes she will eradicate evil from the earth before it happens. “She’s out there waiting, longing, to be freed while the cruel masses deserve to face her judgment. And in the wake of their screams – evil, eradicated,” he tells Steven. Arthur needs the scarab because it functions as a compass that will lead him to Ammit’s tomb so he can carry out his plan.

What Powers Does the Scarab Have in the “Moon Knight” Comics?

According to CBR, in the “Moon Knight” comics, a supervillain named Kang the Conqueror uses a scarab, an ankh, and a scepter in order to time travel and change reality so that he can rule. Khonshu, the Egyptian moon god that granted Marc powers, confronts Kang and distracts him long enough to transport the three totems to his avatars living in different times.

Marc becomes an avatar of Khonshu and is tasked with restoring reality to its original form by retrieving the three totems. He eventually gets the scarab, which allows him to travel through time. He’s determined to keep the scarab from Kang and locate the two remaining totems.

It’s unclear how closely “Moon Knight” will end up being to the comics and if the scarab will be revealed to have more powers in future episodes, so you’ll have to keep watching to find out. New episodes of “Moon Knight” premiere on Disney+ on Wednesdays.

END_OF_DOCUMENT_TOKEN_TO_BE_REPLACED

Is there anything that Target doesn’t sell? From fan-favorite sexual wellness products to innovative collaborations, Target is ALWAYS up to something. You can now add an expanded selection of Levi’s Red Tab jeansto the list of never-ending brands sold at Targe... END_OF_DOCUMENT_TOKEN_TO_BE_REPLACED