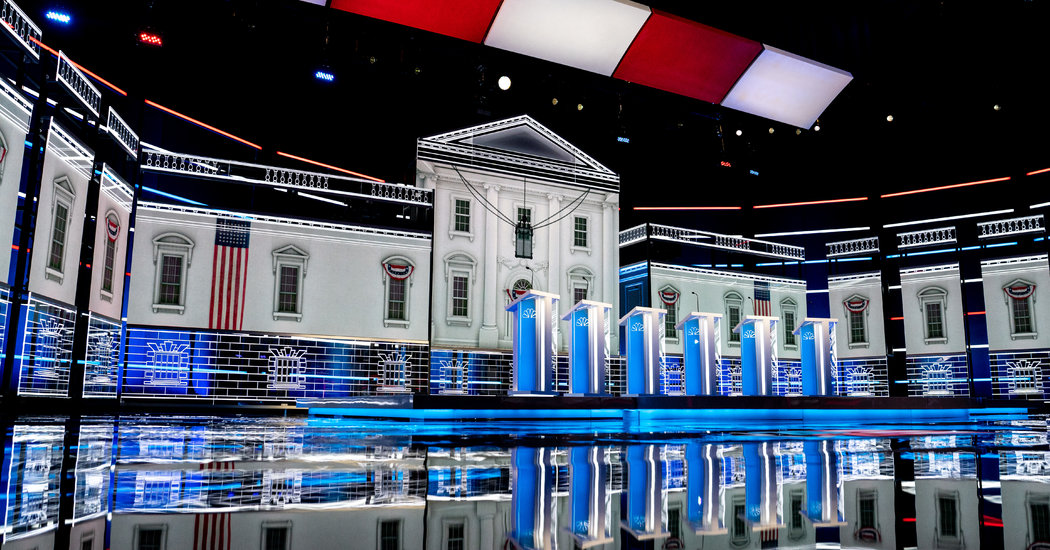 “I’m the only one here I think that’s ever started a business. Is that fair? OK,” he said irritably during one of the many arguments that turned into an attack on the new kid in town.

Bernie Sanders argued that having as much money as Bloomberg was “immoral.” In return, Bloomberg compared democratic socialism to communism.

The rich really are different from you and me, people. For one thing, they apparently find it very hard to release their tax returns when they decide to run for president. “It just takes us a long time. … I can’t go to TurboTax,” Bloomberg shrugged.

Bloomberg was, of course, the target of endless attacks for his spending on campaign ads, which he frequently pointed out he paid for with his own piles of money. You can’t blame his opponents. It’s kind of like a class where everybody wants to be homecoming king or queen, only to discover the moody guy in the corner is trying to buy the football team.

Money and who’s got it was the theme of the evening — for everybody. “The best-known socialist in the country happens to be a millionaire with three houses,” Bloomberg sniffed, referring to Sanders, who has residences in Washington and Vermont, plus a vacation place.

Pete Buttigieg, who likes to point out that he’s the only person on the stage who’s not even a millionaire, took an opportunity to mention “the view from the porch of my one house in Indiana.”

To be fair, Buttigieg is only 38. When Elizabeth Warren was his age, she was a college teacher. Amy Klobuchar had been elected attorney of Hennepin County, Minn. Bernie Sanders had a nonprofit business producing film strips on New England history and a record of losing races for senator and governor.

Mayor Pete is going to have to come back and see us in 30 years if he wants to really get sympathy.

For voters who were not wooed away by Bloomberg’s charms, the debate went along a normal route. Klobuchar and Buttigieg urged practicality — go for the middle, bring everybody along. Sanders and Warren shot for more revolutionary change. Joe Biden recalled regularly that “I’m the only one on this stage” who had actually done whatever it was that was under discussion, whether it was passing health care reform or controlling guns or besting Mitch McConnell.

Biden gets points for being the first candidate to use the word “existential,” which now appears to be the favorite let’s-get-serious political word. Kudos.

Klobuchar, who starred in the last debate with her easygoing manner, was less, um, chipper. She tangled hotly with Buttigieg over who had the right experience to be president. “I wish everyone was as perfect as you, Pete,” Klobuchar said when Buttigieg attacked her for supporting a Donald Trump nominee in the Senate. “You have not been in the arena.”

“Maybe leading a diverse city that was facing ruin doesn’t sound like the arena to you,” he retorted. “You don’t have to be in Washington to matter.”

Warren, who faded into the background in the last debate, made a comeback. She refused to let her ex-pal Sanders off the hook for the awful behavior of some of the “Bernie bros” rampaging on social media. (“We are all responsible for our supporters.”) When Bloomberg (“a billionaire who calls women fat broads and horse-faced lesbians”) listed all the female executives he’s appointed, Warren noted acidly that he was basically arguing everything he’s done was OK because “I’ve been nice to some women.”

Missing from the crowd was Tom Steyer, who’s now sort of the backup billionaire candidate. Steyer was knocked out of the debate by his bad showing in Iowa and New Hampshire, but he’s been campaigning like crazy in Nevada and South Carolina, telling the people his story in the most approachable way possible. “I started a business,” he says at the beginning of his speeches. It’s true, and definitely more populist than, “I made a ton of money as a hedge fund trader.”

As all the candidates in Las Vegas tried to throw in a little plug for donors to visit their websites, Bloomberg said, rather crankily, “Well, you can join me at mikebloomberg.com if you want, but I’m not asking for any money.”

He’s no longer the new kid in town. Wasn’t a very apt description anyhow, given that the new kid is 78. Let all the Democrats in America bow their heads and give thanks for Buttigieg, who is single-handedly keeping the average age of the major presidential contenders under 70.

And now Nevada! Yes, on Saturday we have a hotly contested contest in — oh God — a caucus state. In pursuit of efficiency, Nevada bought the same kind of newfangled app that Iowa did. Now it’s tossed it out, but no one seems totally completely utterly sure how the backup plan is going to work out.

Why can’t the Democrats run their party like a, um, business? Let’s see if we can get Bloomberg to promise that if he doesn’t win the nomination, he’ll take over the D.N.C.

END_OF_DOCUMENT_TOKEN_TO_BE_REPLACED

Is there anything that Target doesn’t sell? From fan-favorite sexual wellness products to innovative collaborations, Target is ALWAYS up to something. You can now add an expanded selection of Levi’s Red Tab jeansto the list of never-ending brands sold at Targe... END_OF_DOCUMENT_TOKEN_TO_BE_REPLACED