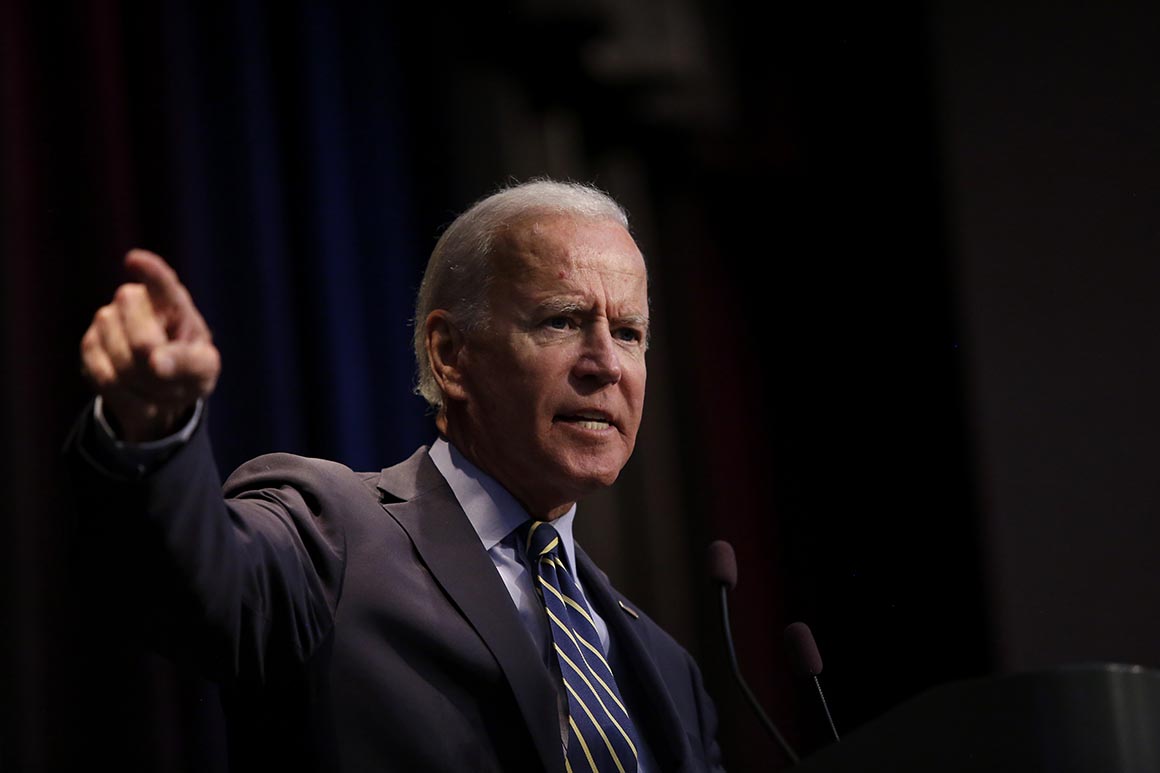 Joe Biden’s campaign is mounting an aggressive behind-the-scenes effort to address the biggest weakness of his candidacy: A lack of enthusiasm among the liberal base, particularly young voters.

Since his landslide victories earlier this month, Biden’s advisers have engaged in talks with a range of top progressive groups, including some that endorsed his chief rival, Bernie Sanders, according to multiple sources familiar with the conversations. The outreach to left-wing organizations and individuals — representing causes from climate change and immigrant rights to gun control and mobilizing underserved black and brown communities — is focused on young activists. Broadly speaking, they viewed Biden as one of the least-inspiring candidates in the sprawling Democratic primary field.

It’s a delicate dance for both sides. For one, Sanders is still in the race. Plus, the progressives recognize that their time and leverage to influence Biden is limited since he’s all but wrapped up the nomination. Still, Biden needs to fix his enthusiasm deficit, which was partly masked by his wins this month, and it’s far from certain that antipathy toward President Donald Trump alone will do the job.

The activists are seeking commitments from the Biden campaign on their issues, knowing that any headway is likely to be on the margins; Biden, for instance, will never come close to Sanders on policies like “Medicare for All.” It’s a distinct letdown for them after coming tantalizingly close to getting Sanders as the nominee. To win the nomination now, Sanders would need to win more than 60 percent of the remaining delegates.

“The dirty little secret is everyone’s talking to Biden’s campaign,” said Sean McElwee, co-founder of the liberal think tank Data for Progress. “There will be fights, but at the end of the day, progressives still hold votes in the Senate and increasingly Democratic voters stand behind our views. I expect we’ll see Biden embracing key planks of the ambitious agenda progressives have outlined on issues like climate and pharmaceutical policy.”

Biden’s team is treating the project like a minicampaign. It has formed an internal working group dedicated to outreach to progressives, which met this week, and is crafting a timeline of engagement over the next few weeks. Senior Biden advisers Symone Sanders and Cristóbal Alex, along with policy director Stef Feldman, are leading the effort.

“Young people are an important constituency in the Democratic Party,” a Biden adviser said, “and we are committed to earning their vote.” Biden held a “happy hour” virtual roundtable Wednesday aimed at engaging young Americans, and in an op-ed published in Crooked Media, he addressed fears among millennials and Generation Z about the economic fallout of the coronavirus pandemic.

The moves are just the beginning of a “coordinated and robust effort to unite the party and beat Donald Trump,” the adviser said.

Biden aides are taking a two-pronged approach. They’re reaching out to what they see as traditional progressive groups with longer legacies such as Planned Parenthood, with which the campaign held a long call ahead of the most recent debate, and movement groups that came of age more recently, including liberal organization Indivisible and climate change-focused Sunrise Movement.

Biden has also backed proposals from Sanders and Elizabeth Warren in recent weeks on the issues of student debt and free college, respectively.

Several progressives who’ve spoken with the Biden campaign said they see room to mold Biden’s policies on gun control, climate change and immigration. They are watching whom the campaign brings on to craft Biden’s policy platforms, hoping to see personnel changes.

On March 11, the day after Biden bested Sanders in five out of six states, his campaign spoke to ex-aides to Jay Inslee and outside advisers to Warren, as well as staffers with Data for Progress about climate change policy. A week later, the former Inslee aides followed up with Biden’s campaign.

The group shared a memo with Biden’s aides that recommended he adopt Inslee’s clean energy standards and proposal to end fossil fuel subsidies, among other climate-related ideas. Biden himself also spoke with Inslee this week, though the conversation focused on the coronavirus pandemic. 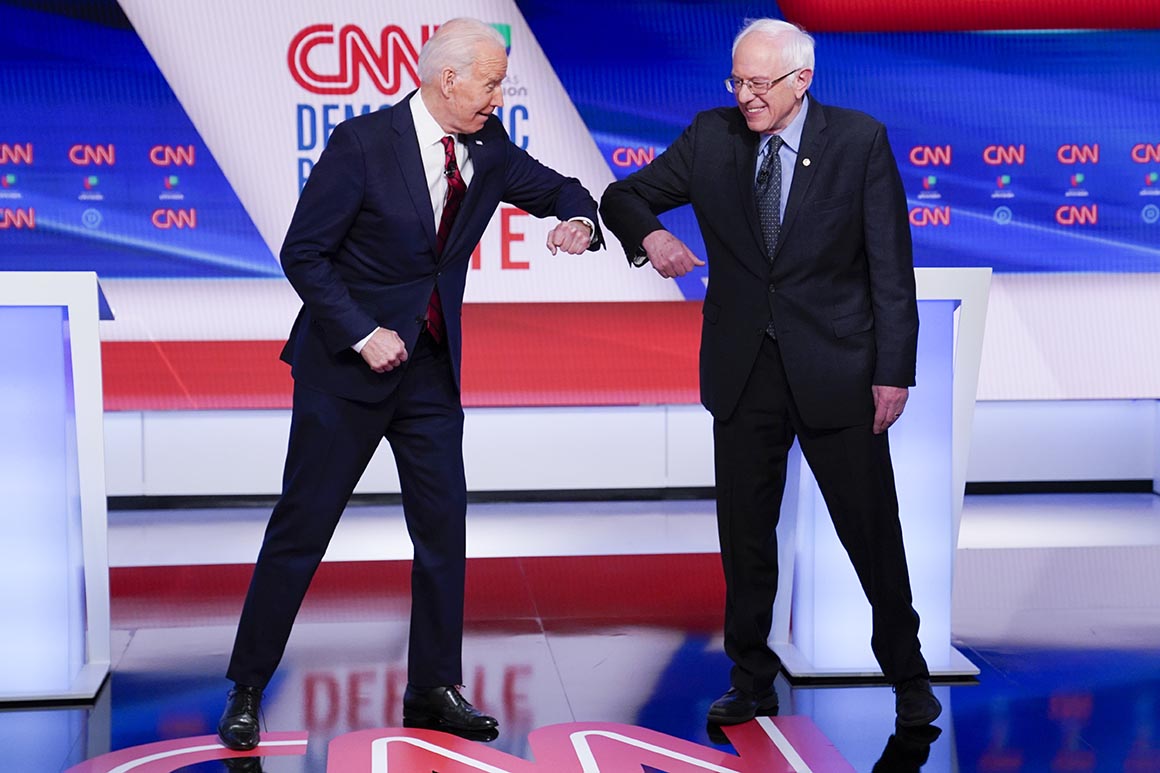 Progressives believe they have leverage because Biden has lost badly among young people to Sanders, and largely trailed among Latinos, too. They also argue that aggressive action on climate change action and Medicare for All poll well among Democrats.

Immigration is another sensitive issue for Biden and the left. United We Dream activists protested at Biden’s events during the primary, hitting the former vice president over what they saw as the Obama administration’s harsh deportation policy. Now the group, which jointly endorsed Sanders and Warren, is expecting to have in-depth policy conversations with Biden’s team in the coming weeks.

There are signs Biden is moving in the group’s direction. After sending conflicting messages about his deportation policy, Biden endorsed a blanket 100-day moratorium on deportations on the day of the Nevada caucuses, the first state where a large number of Latinos voted. He reiterated his support for the policy at the March 15 Democratic debate with Sanders, in what United We Dream and other groups took as a sign that he’s listening to the concerns of their members.

Cristina Jimenez, executive director of the immigrant youth-led network spanning 28 states, said the group’s members “look forward” to “pushing Biden” on his positions concerning the latitude afforded to ICE and Customs and Border Protection agents by local authorities. They also plan to ask him to back legislation to repeal a 1996 immigration law that criminalizes border crossings.

None of the groups is threatening to sit out the election if Biden doesn’t embrace its positions. For instance, Justice Democrats, which made a name for itself backing primary left-wing challengers against more moderate Democratic incumbents — including several with ideological profiles similar to Biden — said in a statement it is “definitely going to support whoever the nominee is.”

But the discussions with the campaign could determine the degree to which they and their members go to bat for the likely nominee.

The Sunrise Movement will work to defeat Trump “no matter what,” said Evan Weber, national political director of the organization, by registering and turning out voters in key battleground states. But whether Sunrise does “broad anti-Trump campaigning” or “explicitly back[s] Vice President Joe Biden” if he becomes the nominee, Weber added, depends on what Biden’s campaign does to “demonstrate that they are taking the climate crisis seriously.”

Progressives across the board contend they can apply pressure on Biden to embrace progressive policies at the same time they help him campaign against Trump.

“If we’re serious about changing what happens in the White House in 2020, it is all hands on deck,” added Alicia Garza, co-founder of Black Lives Matter. But Garza added that “we need to stop talking about Obama and we need to start talking about Joe Biden.”

Garza, who endorsed Warren, said Democrats, with the help of the Biden campaign, have to “start painting a picture” of what a country under Biden looks like. Biden’s team said it has yet to reach out to black activists such as Garza and Black Womxn For, an activist group inclusive of transgender and gender nonconforming people that backed Warren. The campaign wants to give them space after Warren’s exit, a move that highlights the sensitive nature of the talks between his team and progressives.

Some groups that are particularly close to Sanders’ campaign, such as Center for Popular Democracy and People’s Action, also said Biden’s team had not reached out to them.

Alexis Confer, executive director of March For Our Lives, a group led by the Parkland school shooting survivors in Florida, said the Biden campaign has work to do to energize the Democratic base for the general election.

“There has to be an urgency in courting young voters and really making sure their voices are heard in all the planning,” Confer said, adding that March For Our Lives is eager to talk to Biden’s campaign to help expand his gun control platform.

Those voters were excited about the possibility of a nominee with an unapologetically progressive agenda, favoring either Sanders or Warren. Instead, she said, as the primary looks to be coming to a close, “There is a lack of enthusiasm and inspiration right now.”

END_OF_DOCUMENT_TOKEN_TO_BE_REPLACED

In the four years since their daughter killed herself at university, Robert and Margaret Abrahart have been trying to understand why she was left to cope with her problems alone – and to help other vulnerable young peopleDays after their daughter died in April... END_OF_DOCUMENT_TOKEN_TO_BE_REPLACED