Astronauts Love to Rock it Out in Space 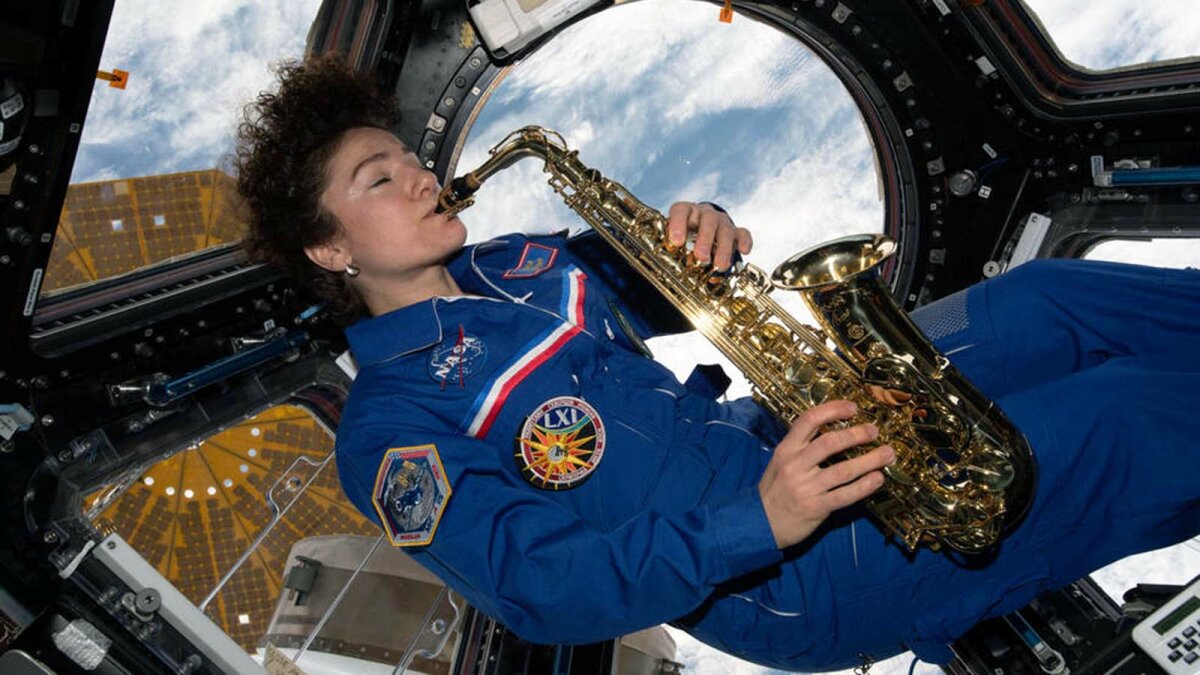 When you’re an astronaut aboard the International Space Station (ISS), every part of your daily routine automatically becomes interesting, whether it’s going to the bathroom or just watching TV.

That same logic applies to one of mankind’s oldest passions: music.

Retired Canadian Space Agency (CSA) astronaut and ISS veteran Chris Hadfield has said that when you break into song in the Final Frontier, it can sound “a little bit nasal.” “It’s a little weird because you’re congested, your sinuses never drain properly,” he told Great Britain’s 5 News in a 2013 interview.

Not that he let that stop him. Hadfield caused a musical sensation in 2013 by covering David Bowie’s “Space Oddity” on the ISS. Collaborating with his Earth-bound son, Hatfield put together a music video, filming the entire performance. The late Bowie himself described it as “possibly the most poignant version of the song ever created.”

You can’t do “Space Oddity” justice without instrumentation. Fortunately, Hatfield had a Larrivée acoustic guitar at his disposal. The instrument had been a fixture on the Space Station since 2001, when NASA sent it there.

To give you some context, the first ISS segment was launched into orbit Nov. 20, 1998. For almost as long as there’s been an International Space Station, there have been astronauts playing music onboard.

There was historical precedent. Gemini astronauts Walter Schirra and Thomas Stafford famously played “Jingle Bells” in space Dec. 15, 1965, using some bells and a harmonica they’d taken along for the trip.

Musical instruments have, from the very beginning, served as ISS morale-boosters as well.

Before NASA’s Carl Walz made his debut on the station in 2001, he said it’d be nice to take a keyboard up there. He got his wish, but certain adjustments had to be made. Whenever Walz played his keys, he kept himself grounded with foot restraints. Also, he’d wind a bungee cord around his legs to hold the instrument in place.

Fellow ISS alum Cady Coleman arrived on the vessel for a 2011 mission with a penny whistle and three flutes in tow. One was temporarily lost when an alarm sounded, forcing Coleman to release the instrument midsong. (Don’t worry, she had an easy time finding it later.)

“I very much like to play music with other people and I didn’t happen to get assigned to a crew where anybody else really played music,” Coleman told MIT in 2014.

However, she got to join Jethro Tull’s Ian Anderson for a “Space-Earth Duet” during the spring of 2011. Each musician played a segment of Bach’s “Bourrée in E Minor.” Anderson recorded his performance in Russia; Coleman filmed hers in low-Earth orbit. Footage from both was later combined and posted online.

Besides the instruments we’ve already mentioned, ISS astronauts have made music with saxophones, bagpipes and even a didgeridoo during their flights.

Cleaning Up the Act

Of course, safety is a top priority at NASA and aboard the International Space Station. Beneficial as they are from a mental health perspective, instruments can’t be allowed to put a crew’s well-being at risk.

“We test some of them by putting a piece of the material into a closed chamber and heating it to as much as 120 degrees [49 degrees Celsius] for three days,” NASA space station manager Mike Pedley said in a 2003 interview. Such tests can reveal a lot about potential safety hazards.

One component that has to be examined is the alcohol instrument manufacturers often use as a cleaning solvent. “Something like benzene… is relatively toxic, and it would only take a small amount to make the hardware unacceptable,” Pedley noted.

That’s why the guitar Hatfield played was built with nonflammable material and lacked benzene altogether.

Now we’re just guessing here, but since nobody likes floating debris in their workspace, Pete Townshend-style guitar smashing is probably a big no-no on the ISS. Save that stuff for Earth.

END_OF_DOCUMENT_TOKEN_TO_BE_REPLACED

The #MeToo movement has brought issues of sexual harassment and gender inequities to the forefront around the world. But how much of a tangible impact has it had on the experiences of women in the workplace? In this piece, the authors discuss their research th... END_OF_DOCUMENT_TOKEN_TO_BE_REPLACED