Are Worker-Owned Restaurants Better Equipped to Weather the COVID-19 Crisis?

The swift and brutal way that the novel coronavirus has wreaked havoc on the local food scene is well documented at this point, as restaurants across the Bay Area have laid off thousands of workers — in many cases almost immediately after the six-county shelter-in-place order was announced early last week. There is, however, at least one category of food businesses in the Bay Area that largely has not had to deal with layoffs: restaurants, bakeries, and grocery stores that are owned and cooperatively run by the workers themselves — businesses like Berkeley’s five-decade institution the Cheese Board Collective, which made the decision to temporarily close its bakery, pizzeria, and cheese shop last week, but didn’t part ways with any of its 70 or so collective members. Instead, it’ll dip into its reserves so that all of the workers can continue to be paid for the initial three weeks when the business will be closed — until at least April 7. This, of course, comes at a time when countless other similarly sized operations have been forced to whittle themselves down to a bare-bones crew of three or four.

“We don’t have to lay anybody off,” Goldsmith, one of the Cheese Board’s worker-owners, tells Eater SF. “When we decided to close, we decided to take that financial hit. And we all take that hit.”

Tamarack, a worker-owned restaurant and bar in downtown Oakland, and Other Avenues, one of San Francisco’s longest-running food co-ops, tell similar stories: The coronavirus pandemic has forced the businesses to make major adjustments, but nobody lost their job — though in some cases they also aren’t getting a paycheck right now. At a time when the entire restaurant industry — and, perhaps, capitalism itself — feels more broken than ever, it’s tempting to view the worker-collective model as a kind of antidote to these economically fraught times. Are these co-ops, where no single boss or board of investors has the power to scuttle dozens of jobs, somehow better equipped to weather the COVID-19 crisis? 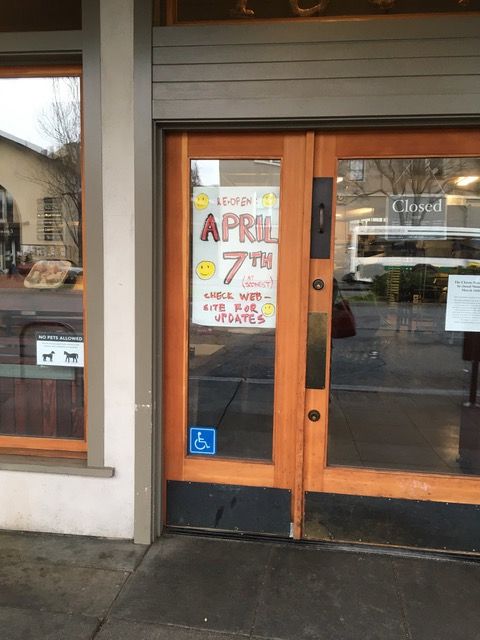 Closed until at least April 7 The Cheese Board

“It’s both easier and harder,” says the Cheese Board’s Goldsmith. Harder, she says, because the Cheese Board makes all its decisions on a consensus basis, and so 70 people — spanning a broad range of ages, ethnicities, genders, and individual interests — had to talk it out until they agreed, for example, to close down their shops last week, to not board up their windows, and to use the ingredients they had on hand to make 300 pizzas to donate to local shelters. Goldsmith notes that she’s been at the Cheese Board for 25 years, but she gets paid the same hourly wage as someone who just joined the collective. They all get the same vote.

Goldsmith acknowledges that the Cheese Board is in a position of relative privilege even among other worker-owned businesses — their rent is reasonable, she says, and they have what she describes as a wonderful, conscientious landlord: “For now we’re okay.” She stresses, however, that they are just as anxious about the uncertainties of a post COVID-19 future as any traditionally structured business. Already, she says, they’re thinking about the way they’ll have to restructure their bakery setup so people don’t just grab what they want themselves — and for the very real possibility that their revenue will drop.

Being worker-owned doesn’t make the Cheese Board immune from having to make tough decisions, Goldsmith explains. The collective has, in the past, elected to give themselves a pay cut. Some older members — and, at age 60, she counts herself among those — might decide to retire for the good of the business. The difference, she says, is that “in the case of a cooperative, you are going to get the membership’s voice as part of the process. Even if it means you’re going to close. Even if it means you can’t succeed.”

Worker-owners getting ready to open Other Avenues for the day. Jeremy Greco

On the surface, the Outer Sunset grocery co-op Other Avenues appears to be thriving in the face of the pandemic. Like many grocery stores, it’s been bombarded with customers, from morning until close, every day since the shelter-in-place order was announced. But, as worker-owner Jeremy Greco explains, the 19-member collective is looking toward the future with a certain amount of anxiety as well — fears of what they’ll have to do if someone at the store gets sick and, in the long term, that the whole country is heading toward a deep recession, if not a flat-out depression. “People are going to be out of work for a long period of time,” Greco says. “We may have a significant loss in sales; we just do not know.”

Like the Cheese Board, Other Avenues makes decisions on a consensus basis, and Greco says he appreciates the thoughtfulness that results from that process, whether it’s been in formulating safety precautions for the store — they’re currently only allowing 15 customers into the store at one time, for instance — or deciding to hold off on longer-term store improvement projects.

“We get to make the decisions. It’s not one person making the decision. We do this collectively, which is very comforting,” Greco says. “We are speaking for our own business and our own lives.”

Tamarack, a downtown Oakland restaurant that serves craft cocktails and Southern-influenced food, is a newer, smaller collective-run business that opened last year. The original members met organizing in movements like Occupy and Black Lives Matter. “We wanted a space where people could meet and talk about politics,” explains Will Adams, who manages the restaurant’s beverage program.

Currently the collective has 12 members, all of whom only work part time at Tamarack — most are food and beverage pros who also hold jobs at other restaurants or bars. Or they did, anyway, prior to closing the restaurant a week before the shelter-in-place order: “We just don’t want anybody to get sick in our space,” Adams says. On the surface, Tamarack’s worker-owners appear to be just as bad off as any laid-off hourly worker at any other restaurant: None of the collective members are getting paid right now. Most have lost their other jobs as well.

Still, Adams says, “I would hate to be a sole proprietor right now and having to make all these decisions on my own.” At Tamarack, post-pandemic decisions have included setting up a grocery distribution program and, starting earlier this week, selling to-go meal kits and cocktail kits at the restaurant. There’s a comfort in being part of a collective, of sharing the burden equally with the other workers, Adams says. And that gives them confidence that the restaurant will bounce back after the COVID-19 crisis, in spite of the long odds.

“I’ve had a lot of bosses,” Adams says. “Not having a boss is amazing.”

END_OF_DOCUMENT_TOKEN_TO_BE_REPLACED

The Nintendo GameCube has a memorable design. The cube-shaped form factor coupled with a carrying handle made it surprisingly portable and pretty darn cute. It was also Nintendo's first console with an optical drive, but Nintendo being Nintendo, it bucked the ... END_OF_DOCUMENT_TOKEN_TO_BE_REPLACED