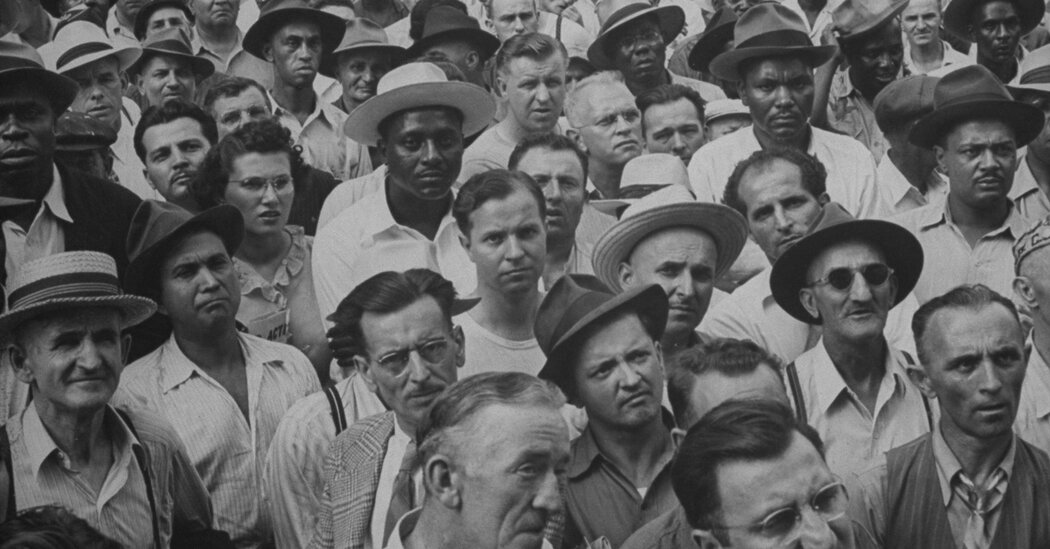 Unions aren’t obsolete, and we need to get them back.

Labor activists hoped that the unionization vote at Amazon’s Bessemer, Ala., warehouse would be a turning point, a reversal in the decades-long trend of union decline. What the vote showed, instead, was the continuing effectiveness of the tactics employers have repeatedly used to defeat organizing efforts.

But union advocates shouldn’t give up. The political environment that gave anti-union employers a free hand may be changing — the decline of unionization was, above all, political, not a necessary consequence of a changing economy. And America needs a union revival if we’re to have any hope of reversing spiraling inequality.

Let’s start by talking about why union membership declined in the first place, and why it’s still possible to hope for a revival.

America used to have a powerful labor movement. Union membership soared between 1934 and the end of World War II. During the 1950s roughly a third of nonagricultural workers were union members. As late as 1980 unions still represented around a quarter of the work force. And strong unions had a big impact even on nonunion workers, setting pay norms and putting nonunion employers on notice that they had to treat their workers relatively well lest they face an organizing drive.

But union membership plunged, especially in the private sector, during the 1980s, and has continued to fall ever since.

Why did this happen? I often encounter assertions that the decline was inevitable in the face of automation and globalization — basically, that unions couldn’t deliver higher wages once employers had the option of replacing uppity workers with robots or moving production overseas. But the evidence suggests otherwise.

Although we talk a lot about robots these days, technological progress was actually faster during the high tide of unionization than it has been in recent years; output per worker hour rose almost twice as quickly from 1947 to 1973 as it has since 2007. That didn’t stop unions from having a big influence on wages.

The impact of globalization is also often overrated. Around three-quarters of employment in advanced countries is in “nontradable” activities that can’t be moved overseas, a proportion that hasn’t changed much over time.

In fact, Amazon is a case in point: While many of the goods you can buy online are imported, Amazon’s market position rests on a huge system of warehouses — like Bessemer — that employs hundreds of thousands of workers. And those warehouses can’t be moved overseas; their whole purpose is to maintain inventories close to major markets, so that Amazon can deliver things in a matter of days.

If the service sector were unionized, then, employers wouldn’t find it easy to replace empowered workers with robots or offshore production. Indeed, other advanced economies like Denmark, which are every bit as globalized as we are, still have largely unionized work forces; even Canada retains a much larger union movement than we do.

Why are unions in America so weak? While the details are in dispute, U.S. politics took a sharp anti-union turn under Ronald Reagan, encouraging employers to play hardball against union organizers. This meant that as the center of gravity of the U.S. economy shifted from manufacturing to services, workers in the growing sectors were left largely un-unionized.

And this decline in unionization has had dire consequences. In their heyday, unions were a powerful force for equality; their influence reduced the overall inequality of wages and also reduced wage disparities associated with different levels of education and even race. Surging union membership appears to have been a key factor in the “Great Compression,” the rapid reduction in inequality that took place between the mid-1930s and 1945, turning America into a middle-class nation.

Conversely, the decline of unions has played a big role in rising inequality and wage stagnation. And workers have lost bargaining power as weak antitrust policies have allowed corporations to gain ever more market power.

While it’s heartening to see the Biden administration proposing a rollback of Trump-era giveaways to corporations, it’s still true that big money has vast political influence. It’s not simply a matter of campaign contributions. Corporate interests also get to set the terms of debate through their ability to offer lucrative jobs to former politicians and officials, their lavish support for friendly think tanks, and more.

Organized labor used to provide a counterweight to corporate influence. Unions were never in a position to match corporate dollar power, but they could offer people power — the ability to mobilize their members and their members’ friends and neighbors in a way corporations couldn’t. And we need that kind of countervailing power more than ever.

So let’s hope that labor activists treat Bessemer as a learning experience, not cause for despair. We still need to get strong unions back.

END_OF_DOCUMENT_TOKEN_TO_BE_REPLACED

The Nintendo GameCube has a memorable design. The cube-shaped form factor coupled with a carrying handle made it surprisingly portable and pretty darn cute. It was also Nintendo's first console with an optical drive, but Nintendo being Nintendo, it bucked the ... END_OF_DOCUMENT_TOKEN_TO_BE_REPLACED

Russia’s Sberbank also part of a new package of measuresAt a glance: what we know on day 42 of the Russian invasionFull report: US and allies to hit Russia with new sanctionsUkrainian man says he was beaten, suffocated and shot‘Barbarians’: Russian troops leav... END_OF_DOCUMENT_TOKEN_TO_BE_REPLACED