Summer is here, and with kids out of school, it’s the perfect time to find new books to read. Several of these July children’s book releases continue series, though the books can also be read as standalones. Several in all age categories depict science-loving children, while more than one has themes of celebrating nature and first-day-of-school nerves. I’ve divided these out into three categories: board books (for readers aged 0–3), picture books (for readers aged 3–8), and middle grade (for readers aged 8–12).

Summer reading doesn’t need to be a chore; nor do books that teach topics need to be boring. Whether your child is learning about pronouns and gender, escaping into South Indian mythology, or making train noises, these 15 July children’s book releases are sure to be a hit with children and adults alike.

The Nerdy Babies board book series continues, this time featuring dinosaurs. Babies and toddlers can learn about the eras dinosaurs lived in, paleontologists, and the names of different dinosaurs. These accessible board books are super fun for toddlers. If your nerdy baby is more into transportation, check out Nerdy Babies: Transportation, which also releases on the 13th. Being You is an essential board book for describing pronouns and gender identification for toddlers and preschoolers. It’s a diverse book that features many pronouns (ze and they among them) while also using direct terms for body parts. This is a much-needed book to fill a gap in available books about gender identification for younger children. For picture book readers, check out It Feels Good to be Yourself by Theresa Thorn and Noah Grigni.

Lala’s Words is a beautiful picture book about the relationship between a child, her mother, and the environment. Lala’s mother disapproves of her daughter’s rambunctious ways. She critiques Lala’s dirty clothes, her penchant for roughhousing, the way she loves growing things. Lala, meanwhile, pours all the kind words she wishes she heard to a small garden of weeds in the otherwise barren city. When Lala’s mother forces her to stay home and stop caring for her garden, the weeds grow and grow and grow until their greenery reaches Lala’s window. With green covering the city, Lala’s mother realizes she’d been critiquing Lala for the very thing that made her special. Zhang uses bursts of yellow to depict Lala’s energy and green as nature overtakes the city in the otherwise black and white illustrations. Listen is a poignant and lyrical homage to the art of listening. The noise of a busy street is transformed into individual sounds and meanings: a moving truck, a dog barking, a car honking, shoes slapping against the pavement. The story begins in the morning, with the child leaving for school, and then ends at bedtime. The child narrator hears a child saying hello, another saying cruel words, listens to her friend’s suffering after she receives those cruel words. She also hears her body and what it tells her and listens to quiet bedtime sounds. The prose is paired with calming illustrations in shades of blues and greys. It’s a lovely, meditative read.

This gently humorous picture book about making friends features a chipmunk who loves to sing. She sings and sings and sings to a rock but longs for a friend to sing with her. So she goes in search of friends and finds a pinecone and a log: not exactly the best singing companions. However, when a raccoon and a moose overhear her attempts to move the log to the rock, and her sorrowful song at failing, they come and help, and chipmunk discovers the friends she’s been looking for, ones who can sing along with her. The colorful illustrations and engaging story make this a fun read-aloud. Kimberly Derting and Shelli R. Johannes continue their science-loving girls series with Vivi Loves Science. Vivi and her classmates are going on a field trip to the beach, where they study flora and fauna there with the help of their teacher and a park ranger. Vivi listens to seashells, considers what really makes that wave-like noise, helps return a fish to the ocean, and discovers a shark tooth that could be 100 years old. In addition to being a great STEM picture book, it’s also an excellent beach-themed read for the summer. Kalamata’s first day of school is tomorrow, and she and her alligator lovey Al Dente are scared. To help herself feel braver, she thinks back to a time when she felt nervous and everything turned out okay: when she visited the Indian spice market with her parents over the summer. Transporting herself and Al Dente back to the market, she remembers all the tasty ingredients she discovered in the market, and how exciting it felt to be brave and try new things. With the courage and comfort good food can bring, Kalamata feels ready for school. This deliciously charming and colorful picture book is the perfect read for children starting school in the Fall. 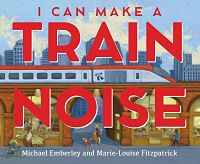 Prolific author/illustrators Michael Emberley and Marie-Louise Fitzpatrick have created a compulsive, rhythmic read-aloud in I Can Make a Train Noise. The title’s words, “I can make a train noise,” are repeated over and over but in different rhythms to match the chugging of a train. It begins with a little girl and her family going to a cafe beneath train tracks. Before long, the girl’s imagination has swept up all the cafe’s customers into an imaginary train, where she creates the train’s sound. My 3-year-old has read this picture book more than any other this year. It’s a compelling read. Moving and heartwrenching, in When Grandfather Flew, Newberry Award–winning author Patricia MacLachlan tells the story of a grandfather passing on his love of birds to his grandchildren before his death. Emma, one of his grandchildren, recalls all the wondrous things she discovered with her bird-watching grandfather, from the beating heart of a chickadee held in her hands to her quiet brother Milo becoming particularly keen to identify birds with his grandfather to her grandfather’s growing blindness and the children identifying birds for him. Accompanied by Chris Sheban’s beautiful yellow-toned watercolor and pastel paintings, this picture book is a touching tribute to a grandfather that, I’ll admit, made me tear up.

In this illustrated early chapter book, each of the 11 chapters introduces a child from Cattywampus Street and tells an extraordinary story from their lives. Jamal’s magic ball can find him even after it’s been stolen. Charlotta can shrink small enough to fit inside her playhouse. These imaginative and delightful tales are perfect for beginning readers as each chapter can be read as a standalone, and each child’s story is as captivating as the next. Kiki Kallira has anxiety, and drawing helps her combat that anxiety. She fills her sketchbooks with the depiction of the South Indian mythological stories her mother tells her. However, when Kiki draws the legend of Mysore and the demon King Mahishasura, she unwittingly creates a portal that allows the demon to enter her room. To get rid of Mahishasura, Kiki must travel to the world she’s created through her drawings. This action-packed fantasy adventure is a blast to read. Josephine Against the Sea by Shakirah Bourne (July 6, Scholastic Inc.)

In Barbados, 11-year-old Josephine lives with her father, a fisherman, after her mother died a year earlier. Her father has tried dating again, but Josephine always manages to push them away. But then there’s Mariss. There’s something off about Mariss, and the more Josephine watches her, the more she’s convinced that Mariss is really a sea creature, specifically Mami Wata. This delightful novel is both heartwarming and thrilling. While Forever This Summer is the second book in the Love Like Sky series, it can be read as a standalone. Georgia and her mama move from Atlanta to the small town of Bogalusa, Louisiana to take care of her great aunt Vie, who has Alzheimer’s. Vie owns a popular diner, and Georgia wants to help out there, but no one has the time to train her. Then she makes friends with Markie, who has a limb difference. Markie is slightly older and works at the diner. She used to be fostered by Vie, but now she’s fostered by Roselle. When Georgia’s best friend Nikki comes to visit, the three girls try to raise money for Alzheimer’s research. This series full of engaging characters tackles big issues while still being heartwarming and fun. Maya is starting 5th grade, but instead of feeling excited, she feels nervous. Her friends MJ and Jada aren’t in her class, and she’s worried about making friends. Then she discovers a robot while helping to clean the school and takes it home. She loves science, so she decides to work on the robot and see if she can program it to do neat things. This illustrated novel is a perfect read for STEM-loving middle graders. World in Between: Based on a True Refugee Story by Kenan Trebinčević & Susan Shapiro (July 27, Clarion Books)

Taking place in the early 1990s, Bosnian Muslim tween Kenan lives in Brčko, Yugoslavia. He loves drawing and playing soccer and hanging out with his teammates, but as political tensions rise, his teammates and friends alienate him. Soon, he and his family are forced to leave Yugoslavia as refugees and travel first to Vienna and eventually wind up in the United States. This is a powerful story about a refugee journey from the eyes of a preteen and is based on the author’s own experience.