How I Made This: Sara Hendren’s Ramps for Disability Dance

Published 3 days ago USVI News3d ago

Sara Hendren is an artist, researcher, and writer who explores how the built world affects the lived experience of disability. Her work has included collaborative public art pieces and design projects, including the creation of a lectern for people of short stature, a navigational cane that plays music, and a series of ramps for the disabled dancer and choreographer Alice Sheppard. She has researched and written about adaptive technology, homemade prosthetics, inclusive architecture, and other topics in the field of accessible design, including in her 2020 book, What Can a Body Do? At the Olin College of Engineering in Needham, Massachusetts, she leads a class—and test kitchen, of sorts—on design for disability called “Investigating Normal.” Her endeavors respond to physical realities and individual dreams; they are both practical and resonant.

As Hendren tells ARTnews, she has an enduring interest in straightforward mechanisms like the lever, the pulley, and especially the inclined plane. Developing a stage set for Sheppard, who uses a wheelchair, was an outgrowth of Hendren’s long-running “Slope: Intercept” project, which began in 2013 when she designed a modular set of wooden ramps—intended for use by both wheelchair users and skateboarders—for single-step entrances.

Intrigued by that project, Sheppard approached Hendren in 2015 about designing a large-scale ramp for dancing on stage. Around the same time, Olin professor Yevgeniya Zastavker asked Hendren to come up with a challenge for her introductory physics class. Hendren immediately enlisted Zastavker and her students to partner with the dancer in creating a stage that could facilitate new expressive possibilities.

To begin, Sheppard led the group on a tour of Olin’s grounds and its existing ramps. The students then borrowed wooden floor tiles from the college’s student dance club to create a temporary dance space for Sheppard and made a series of wooden ramp prototypes of varying dimensions for her to try. The dancer also experimented with the set of ramps Hendren had previously designed for “Slope: Intercept,” demonstrating her turns and banks for the ramp designers-to-be.

To plan the stage, students made models with paper, computer-aided design (CAD) programs, and 3D printers. They Skyped with Sheppard, who also made multiple visits to campus. Under the guidance of their professors and through several late nights of work, they built a down-sloping wooden structure measuring nearly 24 square feet in area.

The build challenged different students in different ways; some tried their hand with a chop saw for the first time. Others learned to employ a shop bot—a computer-guided router. With this system, Hendren says, “[you] can design something in a digital platform and then feed it to the machine, and it’ll cut it for you with a level of precision that used to be limited to large-scale manufacturing . . . It’s what students used to get Alice’s project done, especially to get the . . . curves just right.”

Sheppard returned with her dance partner, Laurel Lawson, to perform on the newly built structure. After this initial run, the ramp was adopted as a key dance environment for Kinetic Light, the disability arts ensemble Sheppard leads with Lawson and Michael Maag, becoming the setting for Descent, Kinetic Light’s first touring production. “In Descent,” says Sheppard, “ [Lawson] and I learned to listen to what the ramp curves and gradients showed us, building new performance techniques and specific choreographic vocabulary all along the way.”

The Olin project led Hendren to envision and design a smaller, portable ramp kit for Sheppard. Partnering with Olin alumnus designerAdit Dhanushkodi, she designed two small ramps, a medium ramp, a large ramp, and interlocking dance tiles. Hendren was already headed to the 2016 Seoul Mediacity Biennale to present structures from “Slope: Intercept,” and Sheppard joined her. South Korea–based designer Giho Yang constructed the portable dance kit in Seoul, and Sheppard used it in the performance of a solo piece called “Under Momentum.”

Hendren says multiple people using wheelchairs attended Sheppard’s performance in Seoul. “We had a number of engagements with disability activists and advocates, she says. “That kind of encounter is what I love most in a work: when the material becomes a springboard for people to find one another in a convivial way.”

A duet version of “Under Momentum” has been performed on the portable ramp kit at the Whitney Museum of Art, the Oregon Shakespeare Festival, and other venues, and the large ramped stage set and smaller ramp kit are both still integral to Kinetic Light’s repertoire. 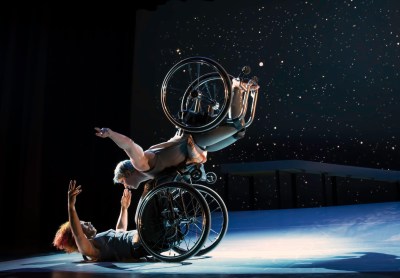 Featured image: Alice Sheppard and Laurel Lawson rehearse on a new wooden dance ramp with multiple planes. Sheppard, a multiracial Black woman with coffee-colored skin, lies on her back across an inclined wooden slope, her wheelchair’s wheels pointing up and angled slightly to the side. Her head rests along the edge of the ramp. Lawson, a white woman, lies on her back on a flat plane made of wood, her body and chair perpendicular to, and just below, Sheppard. Lawson’s arms fall backward onto the floor behind her.

Image 1: A white, rectangular paper model of a dance ramp with curving edges. Made of perpendicular, intersecting strips of cut paper, the model contains several slopes. The model was used to design a large wooden dance ramp at the Olin College of Engineering.

Image 2: On a wooden ramp at 45 degrees incline, Laurel Lawson, a white woman, wheels her chair uphill coming nose to nose with Alice Sheppard, a multiracial Black woman with coffee-colored skin, who is coming downhill on her knees.

Image 3: Laurel Lawson, a white woman, balances on Alice Sheppard’s footplate, with arms spread wide, wheels spinning. Alice, a multiracial Black woman with coffee-colored skin, opens her arms wide to receive her in an embrace. A huge ramp and starry sky fill the background; their wheelchair wheels shine in the light.